Part 8 of How To Setup A Gibson Les Paul. What’s Covered: Assessing Neck Relief, the Nut, defining a Balanced Setup, and the Intonation Process.

Part 8: How To Setup A Gibson Les Paul. Relief, the Nut & Setting Intonation

We’re having a look at neck relief. I want to see a gap of light around the middle of the neck here around the seventh fret between where I’m holding the string down. A gap of light roughly the same thickness as the third string itself. Now that could be more or less depending on how you like your action, but it’s one of these things where you test it out.

As a general rule for me that’s a good starting point because this neck is pretty straight. It’s my medium. It’s my midline, it’s a great starting point. Always try to start with the neck a little bit straighter than ultimately where you want it. When you start to induce compression through string pressure, relief will come around naturally.

So now regarding the nut, I recently replaced this nut, so I know it’s in great shape, but if it had an issue I could deal with that, if it’s with a string or two was buzzing, I can show you how to repair that. There’s a couple of videos I have on that.

In most cases the nut is going to need just tiny little tweaks. So you have at your availability, you can get nut files from Stewmac or All Parts. Personally I prefer AllParts. I find that Stewmac is all well and good, but they’re more in the business of hard selling products than I’m comfortable with these days.

Overall I’m pretty happy with the condition of the nut. I’d prefer to keep the whole nut thing as a separate topic on it’s own.

The Concept of a Balanced Setup

Let me say this, within the context of the instrument, this is very very important. We have a triangular set of elements that we want to keep in balance. Think of it (action) like a perfect triangle, one point is the nut, one is the bridge, two fixed points where the string attaches to the instrument, and then there’s relief itself.

As mentioned, the nut is a fixed point. If it has issues it has to be addressed so that the strings will go through it properly, etc, etc. So that’s kind of a fixed anchor point.

The other two elements being the bridge and the relief, have a little more adjustability. Nonetheless, they should all be in harmony when everything is aligned properly.

I don’t see any real issue with the nut, this one is just dandy, so I’m going to leave that.

Now down to the bridge end, the relief is good at hand, and it’s intonation time. I’m not going to spend a great deal of time on this as well because intonation is an art form. 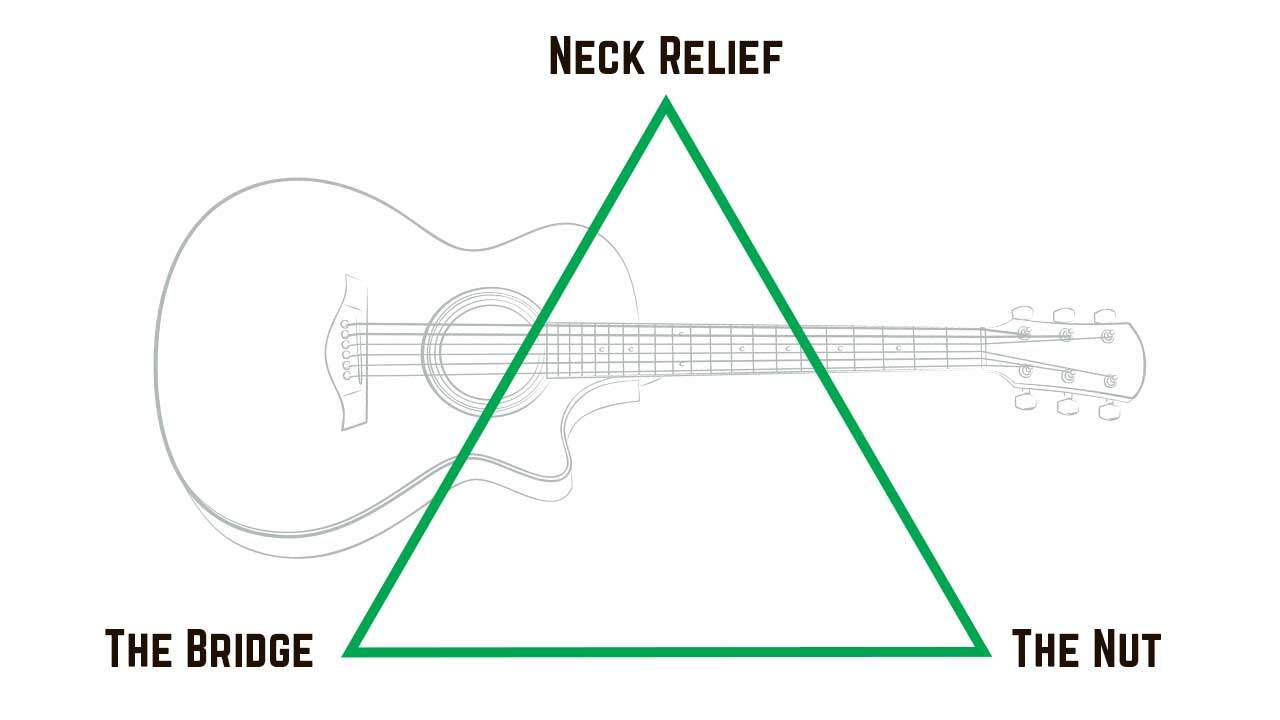 I’m going to give you the short version of how this works. First off, we just installed brand new strings. They’re fresh, they’re really elastic, and there’s a lot of unrestrained junk living in every aspect of the string.

Okay, that’s the first pass. They all dropped about a semitone to a tone.

Fact – you want to keep your guitar in tune. One of the most important things you can do is stretch your strings.

I’ve had pros come in and say, “My guitar, it’s not holding a tune.” First thing I do is stretch their strings, and they’re dropping, and I’m going, “I’m sorry man, it was just your strings.” And they’re going,”Oh okay, all right.”

Point is, always make sure your strings are stretched out fully.

Back to our guitar on the workbench, that’s one degree of stretching let’s say.

Now we’re ready to intonate. The process is we’re getting that initial elasticity out of the strings, so that they are…put it this way, if you try to intonate with the strings being fresh and elastic, your pitches are going to drop.

You’re not going to get true reads because the strings are too wrangly and unrestrained. They’re just too happy, it’s the way it is.

Anyway, I’ gonna plug this in. Actually before I do that I’m going to clean up the jack.

This is simply a piece of 220 wet dry sand paper, that’s my preference. Coarse enough to be effective, but fine enough to not really do any damage. And roll that up, I’m going to put that in the jack, and twirl that around a little bit.

I can already see some, I don’t know if you can see that dust, but that’s actually it’s not the gold plate coming off, that’s a little bit of rust coming off, or not rust but corrosion.

It’s a basic process I suppose, so I just flip that around 180 using the other end, clean that up. Okay, get rid of that. So now I know that the jack is in good shape.

Now I’m going to make sure the outer nut of the jack is tight. Give it a little torque with an open end wrench, okay? There’s a trick to keeping that from spinning around which again I’ll share that at a later date.

I was looking for the correct size on that. This is a little sloppy because it’s metric, and not imperial like it should be.

Anyway, we’re going to plug that in, all is clean. Okay, I’m going to use my treble pickup.

For more on the entire process, check our complete guide on How to Setup a Guitar.

Some Great Choices for Guitar Tuners:

Being able to get a clean signal to the tuner, the tuning device whether it’s a clip on or whatever, is very important. I’m going to give you the idea of how I go about this,

I’m not going to be absolutely specific about going through each, and every string, and what not, because once you get the initial process you’ll have the idea.

Okay, I’m not using open strings, and 12 fret, or harmonics or anything like 12 fret harmonics specifically. The reason is in every other situation, whatever instrument it is,

if you don’t know for sure is that nut is absolutely cut the way it’s supposed to, you can get misreads along the entire string length. You have to know beforehand that the nut has been cut properly, and you don’t know that until you address it.

So in order to eliminate the possibility of an improperly cut nut, this is how we go about it.

I’m going to start with the fifth string, fifth fret which is a D. I’m going to set my tuner, it’s just an old analogue tuner that needles just beautiful, it’s a fluid motion, it’s not sketchy or anything like that.

And I’m going to use a 12 fret harmonic from the fifth fret (which would be the 17th fret visually), so then I’m getting that D way up the neck.

I should get it in tune first. So I’m registering a specific point on the tuner, it doesn’t matter if it’s perfectly on center right, you don’t have to be that fussy about it. Just get it so that it’s in the ballpark, but register with your eyes.

Take note of exactly where the needle sits or where the registration point is for what you’re seeing. And then I’m going to hit the twelfth fret harmonic (from that point) just to filter it a little bit, just to double check.

That’s beautiful, now up here, that point I just saw a second ago is actually registered now. It’s a little bit on the high side, which means that the scale length is too short. So I have to lengthen it.

I’m going to throw in a little bit more length into the string. Pop the string, helps to seat it, okay? To get it to sit pretty. Now I’m looking at my point, it’s still off center, but it doesn’t matter, it’s within tolerance.

For a typical 6 string electric guitar (3 plain strings and 3 wound strings), your intonation pattern at the saddles should look like the image below:

I just want to see the exact same thing at the octave note when I do this. I’m using a moderate pressure to do this too.

Okay. That’s great. If I press I can actually get that to deflect like, “Whoa.” We’ve got to use like a reasonable amount of pressure. That pitch right there is exactly the same sound, and pitch as that fretted string.

So as far as the tuner goes, it’s exactly the same thing as reading, and it’s on the fret board.

So much of what we play on the guitar is on the fret board. Use the frets on the fretboard to intonate with. You want to do it properly as it gets around any discrepancies with the nut or silly things like that. Anyway, that is the short course on the intonation process as it works.

I can double check this by using a B.

I’m taking note of where my needle sits, and then I come up here (an octave away). And it’s bang on the same spot, that tells me the string is in tune, It’s awesome.

I’m going to use that same process, and go through all my strings, and use fretted notes down here, and then a 12 frets up an octave. For each string multiple notes,

I can use just my analogue tuner, it’s not chromatic or anything just the regular string means for the guitar, and it’ll do a fantastic job.

Anyway I’m going to carry on with that, I’m going to finish that up, and we’ll get back with the home stretch. Back in a sec.

My Guitar Is Making Me Awesome T-Shirt

As if you weren’t awesome enough already, playing your guitar makes you that much more… awesomer!

Wear your guitar, and this excellent t-shirt, with confidence and sonic pride.

This Les Paul Guitar Player Unisex T-shirt is super comfortable, feels as good as it looks, and features an awesome print that will last wash after wash. Show your appreciation of the best guitars the country has to offer with this excellent quality tee.

A tribute to one of the finest creative minds to ever exist, this super soft Vitruvian Man T-shirt is a pleasure to wear, and show the world you have great taste in fine arts!