Why Should You Get A Pro Guitar Setup?

In Summary, The Question Remains: “What does a guitar setup cost?”

Why Should You Get A Pro Guitar Setup?

Even if you have a modest investment in a single guitar…

Wear and tear will eventually take their toll on your guitar and your patience – breaking strings, going out of tune, scratchy electronics…. Now the question is, “what does a pro guitar setup cost?”

Before we get to that little detail, here’s a top ten list of benefits that come from the relatively minor investment in a pro guitar setup.

Better made guitars and antique instruments, like anything in the collectible world, are simply more desirable if they’re in better condition. While an exceptional painting may hang for years not needing any significant maintenance, things that are mechanical – cars are good example – need regular maintenance to keep them functioning properly.

Food for thought: given the condition of an instrument that is in tip-top operating condition versus an identical one that’s got problems for the same price, which one is likely to sell?…

Regular trips to the guitar mechanic will help keep a significant investment from going south, and I’m not talking about your ex heading off to Brazil with the proceeds from selling your ’62 Tele because you got caught with your hand in the cookie jar.

Keeping that axe in as cherry a state as possible will maximize your investment – and perhaps even fund your divorce proceedings.

Things wear out, no doubt, and getting a problem fixed early will save you grief and dollars. Time, friction and particularly pressure take their toll on guitars in an insidious way.

The imperceptible creep of the constant pressure from the strings is as about as nasty as it gets in debilitating a guitar. You might put a guitar away for a couple of months only to bring it out and find the strings high enough off the fretboard to consider finding an arrow to see if you can use the guitar as an archer’s set.

Or maybe the instrument has sat in a humid basement long enough to start seeing the tell-tale brown fuzz that forms around screw heads and small metal parts. They’ll seize up tighter than a camel’s butt in a sandstorm.

Bee stings are nasty, but have you ever been stung by a string? Snapping strings will easily pierce flesh or slap you so hard you’ll think you’ve been stung by a wasp. The shock is often followed by the most wonderful blue streaks of creative profanity. Not to mention you can have an eye taken out – no goggles please.

, a minimum of a couple times a year. Save the air!

Do you know what a loose guitar jack does to a speaker with a couple hundred watts behind it? Nothing remotely good – sometimes we call it “catastrophic failure”. I’m sure you’ve heard it before.

Get that thing fixed!

Modern instruments are designed to be adjustable to accommodate variations in players styles and to cope with changes in environment. This does not mean it’s a “set it and forget it” luxury that’s been designed into your guitar. They’re there for a reason.

An instrument left to it’s own without attention to the little gremlins that take roost over time will develop sticky bits, and those sticky bits will add up to frowns due to extra service costs. As mentioned previously, seized parts like fine adjustment screws are often found in bunches and are no fun for anybody.

As luck would have it, while writing this article I received a call about the sale of a bass that had exactly that problem – a seized saddle screw. The buyer was concerned about it affecting the cost of the deal. My response? Of course it would. I can’t tell you how many times I’ve seen a tiny little thing like that turn into a major pain. So I had to defer to experience and advise him that it may be an issue, and an indication of other potential problems.

The point? He has a decision to make which could ultimately sink the deal – over a little detail that the owner could have easily had taken care of.

A well maintained guitar is not only a happy guitar, it’s also a joy to play. Keep things in good working order and keep that smile on your face.

If you’re interested in doing it on your own, you can find a comprehensive list of guitar setup tools here.

Having your guitar fine tuned by a pro coaxes the max out of the instrument. By reducing the amount of effort it takes to physically play, your enjoyment level rises allowing you to fully experience what it is to just… play.

Entry level instruments?.. all over the map. If your local music store doesn’t offer to throw in a setup, demand it. It’s absolutely critical to give new players a tool that will not sour their first experiences.

Having said that even pro level instruments are not immune. Fresh out of the box, even the best made guitars need a little help to be fully tailored to the end user.

Virtually all major brands will be manufactured to a set of generalized tolerances which then need to be tweaked once they’re in the player’s hands.

This is good stuff to know especially if you’re considering stepping up to the next level of guitar goodness and investment dollars. 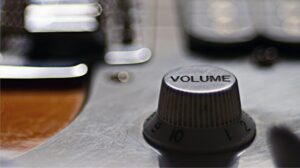 Chattering, sizzling, buzzing, soul-sucking looseness will rob your guitar of the energy that’s supposed to travel from the strings, through the rest of the instrument and on out to the amplifier.

That energy you’re losing?… we call that tone.

Do you want a guitar that’s rock solid and dependable giving you everything it has to offer? Or will you settle for a clap-trap thin-voiced guitar shaped object that barely qualifies as an instrument.

Ok, that last statement might be a little harsh, but it’s a fact: maximum volume and sustain can only be achieved when all the parts have been nailed down, finessed and had the bugs worked out.

Not only will a loose part drive you nuts like a steel bucket full of cicadas in August, but the loss in transferred energy can destroy your guitar’s most beautiful voice.

Batten down the hatches and turn it to eleven!

If you live in an area of regular seasonal change, you will have to deal with the natural changes in humidity that affect guitars. Neither acoustic nor electric instruments are immune to the swing of the seasonal pendulum.

And that’s exactly how you should picture it.

Now imagine being able to reduce the swing of that pendulum, gradually, over time so that it’s effects are minimal throughout the whole year.

When an instrument is first manufactured, it can be an uneasy marriage of wood, metal and plastic elements that have to come to grips with being in a new shape that we refer to as a guitar; more of a collection of parts than a cohesive unit.

With regular service, those heavy swings from one side to the other become less and less as the little variations causing all that grief get reigned in. Eventually the guitar becomes much more stable requiring less heavy lifting on the service end and only requiring trips to the clinic for general maintenance.

A good technician will make that pain go away, and ease the worry of any other nags in your preferred axe.

As an aside, one of my favourite challenges is punk-proofing guitars for some of the local rockers. They are brutal on their instruments and they have to hold up.

And the biggie? Tuning?…

That one’s SO big it get’s it’s own designation: 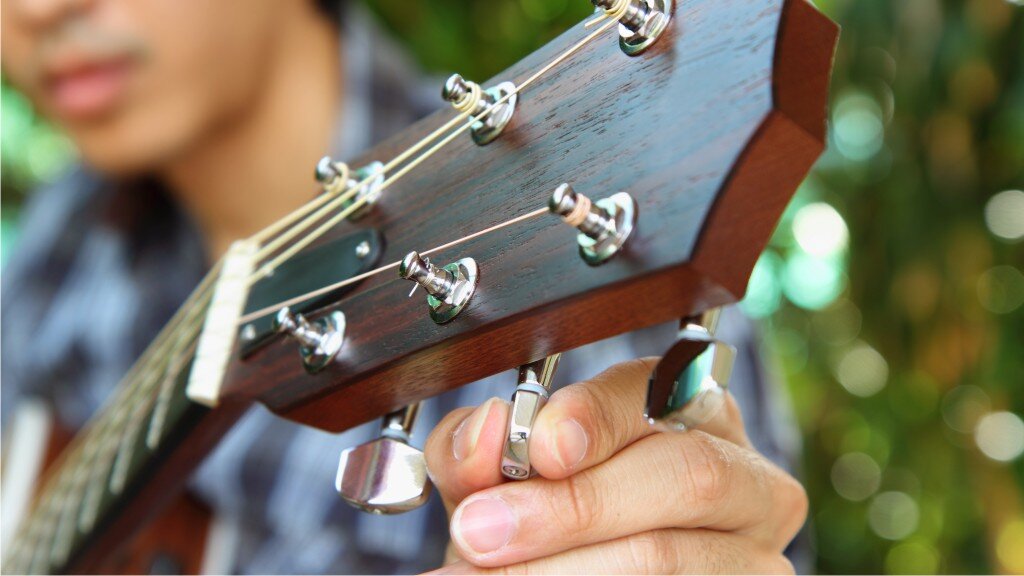 Nothing, I mean nothing is more annoying than a guitar that won’t hold it’s tune.

The reasons can be many; tuners, saddles, strings, operator error… The list goes on.

They’ll all go away with a proper setup (well, at least most of them – operator error knows no bounds). The tuning gods will smile and there will be harmony in the guitar universe.

Beyond all the physical manifestations of having a guitar set up properly, one thing stands out in my mind as a clear winner – the why.

Why do we as guitar players even pick it up in the first place? Why do we want an instrument that’s trouble free? 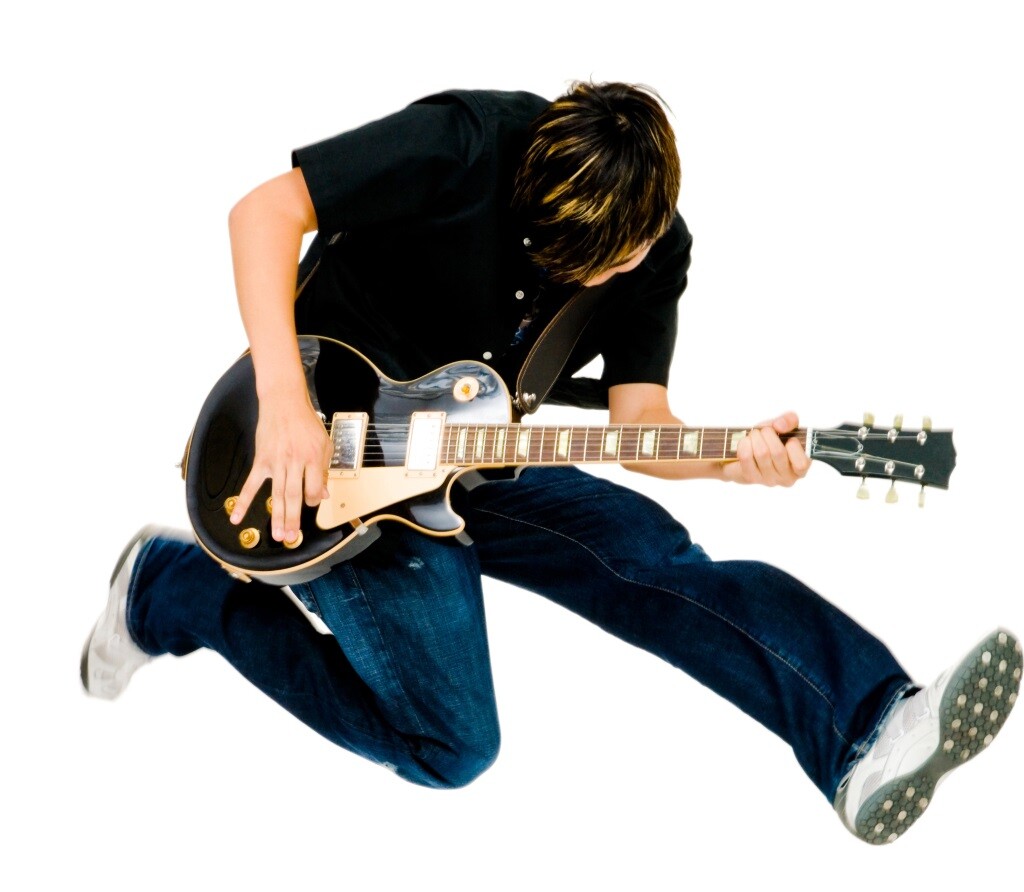 To exercise our primary musical voice without restrictions, without the baggage of a compromised instrument.

The net result is a guitar that’s much more stable, predictable and dependable. and an extension of your true emotional self.

In Summary, The Question Remains: “What does a guitar setup cost?”

For a tip-to-toe nuts and bolts setup you’re looking at an average fee of $70 or so depending on the level of work involved, style of guitar etc. Like anything else that requires labour – time is money.